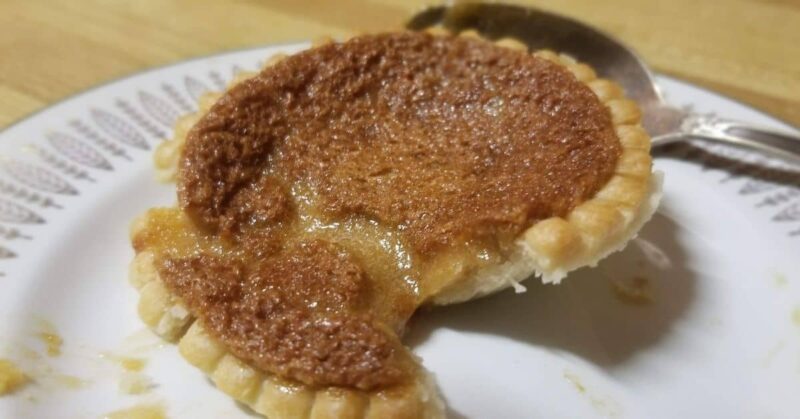 My mother-in-law’s French Canadian sugar pie recipe – delicious, decadent, but also incredibly easy to make. One of the simpler traditional Canadian desserts, you might already have the ingredients in your pantry to make it.

One of the simpler traditional Canadian desserts, brown sugar pie is creamy, sweet, and very easy to make. A few simple ingredients bake and melt and bubble together to make a wonderful taste treat.

If you're looking for authentic Canadian recipes, you can't get more authentic, more French Canadian, or more memorable than tarte au sucre.

These are all what my grandfather called ‘good, wholesome farm food' – molasses, cream, eggs, butter, and flour. These are ingredients that remember where they came from.

It's Not Authentic Because ………

I've had a number of people tell me that this recipe isn't authentic “because”. One argued that it should have only maple syrup instead of sugar. Another disapproved of the egg. Another said it had to have brown sugar (a complaint that had me checking my recipe because … wait, isn't that exactly what I use??)

Maple Syrup Sugar Pie is a whole different pie. Definitely something to try eventually. This isn't it.

I can't find a single, not one, recipe online that makes French Canadian sugar pie without egg. In fact, there's a French (like, from France) version that uses extra yolks *and* yeast – completely different recipe. I found one that uses sweetened condensed milk instead of cream (which I imagine worked just fine when the cow wasn't in milk – canned milk has been around since the 1800s).

As I note in the ingredient list, white sugar + molasses = brown sugar. It's magic like that. And the best part of not premixing is that both sugar and molasses store far better than store-bought brown sugar.

My father-in-law was born in the 1940s and passed away last year. This was the recipe he gave me, which he got from his mother, and which my husband translated because it was written in French. The only change I made was mixing up my own brown sugar.

Is Sugar Pie the Same as a Custard Pie?

While both are delicious, no, they're not the same. If you make Banana Cream Pie, for example, you will make up a custard filling in a saucepan, then pour it into the crust with the bananas and finish it in the oven.

Is It the Same as Pecan Pie?

A pecan pie is a type of sugar pie. But of course, there are differences – like a whole lot less gooey filling and whole lot of pecans.

Pecan pie also uses corn syrup (at least in every recipe I can find), which would make my father-in-law turn in his grave.

How I Discovered This Dessert

That's how that French phrase translated.

Whatever that was, I certainly wanted to try it.

So far my sojourn into French Canadian cuisine had been wonderful, with Pork Hog stew (I swear, no matter how often I tell my father-in-law that we say ‘pork hocks', he says ‘pork hog' for his French Canadian Pork Hock Ragout) and some delicious pork pate (so much pork).

Traditional French Canadian cooking is amazing. When I saw the teeeeny little sliver, I said, “Can't I get more than two bites? I mean … pie. And sugar. Plus my sweet tooth …”

Dominic and EJ both gave me a steady look for a few moments, trying to decide if they should tell me or let me find out on my own, and then together turned around and cut me a BIG slice of French Canadian sugar pie.

I learned my lesson.

When you make this delicious pie recipe (and you really should), serve it in teeeeny little slices because sugar pies are incredibly sweet. (You figured that from the name, right?)

There's a myth that all the French Canadians are in Quebec.

The opposite to that myth, which I've also heard from people, is that everyone in Canada is French.

(If you've heard that there are some amazing Canadian desserts – that's not a myth at all.)

Yes, we have two official languages in Canada – French and English – but truthfully, most of the French spoken in Canada is in New Brunswick, Quebec, and northern Ontario.

EJ's family is from northern Ontario, a town called Sudbury.

When we were living there, I saw a car with Florida licence plates and joked that he was a very long way from home.

He said, “I'm from here and I usually come home in the summer. I was busy that week, though.”

That about sums up Sudbury. A pleasant winter day is -18C (around 0F), and summer is incredibly short. No wonder the French have such amazing desserts that are made with very simple pantry ingredients.

Many of these traditional French Canadian desserts have names that translate very rudely. (I mean, there's one named because it looks like a nun's bum!)

But this ….. oh, this is pure delicious.

So What Is Sugar Pie?

Okay, it's NOT Sugar Cream Pie. Also delicious, but not the same thing.

This incredibly delicious dessert is basically a mixture of white sugar, molasses, cream, vanilla extract, and eggs. Thickened with just a tiny bit of flour, it's poured into a single pie crust and baked.

And by single crust, I mean no topping. This recipe actually uses two single crusts and makes two pies.

OR (as you can see in the photos), it can be use to make about 3 dozen mini tarts!

The ingredients are simplicity itself, and you probably have them all in your pantry. It's really the perfect pie to make when you want the appearance of decadence without all of the work (or cost!)

Time to learn how to make a sugar pie … and you don't need to speak French because I translated my mother-in-law's recipe for you.

You will need to mix sugar with molasses.

You COULD be all non-thrifty and buy store-bought brown sugar. I have always found that that is too expensive and it doesn't store well. Just mix your own. It'll taste exactly the same. No one believes me when I tell them, but it's true – 2 tablespoons molasses in a bowl, then 1 cup white sugar, and stir until combined.

To that, mix in milk or cream. I strongly recommend heavy cream unless you're making this in the middle of a blizzard and there's no cream to be found. In a recipe like this, counting calories is just silly.

Use either a wooden spoon or whisk to mix in the eggs, melted butter, and flour. (Could you use cornstarch? I don't know … and this isn't a recipe I plan to fuss around with). If there are teeeny lumps of flour, I promise no one will notice.

And then you … well, that's it for the filling. I've heard there's a version of this that uses maple syrup – something I'll need to look into.

Now dust uncooked pie crusts well on both sides with flour. You shouldn't need much – a teaspoon or so. This keeps the dough from totally disintegrating into the filling.

Well, it helps anyway.  The filling sort of soaks into the unbaked pie shell, but the flour slows that down a bit.

You can definitely make your own pie crust, but I have to admit I like the disposable ones, especially since I usually only make these for “bring a dessert” occasions. I'd hate to leave a pie plate at someone's house.

As soon as you're done, preheat oven to 400F. That's going to seem a bit high, but you'll have to trust me.

Divide the pie filling between the two pie crusts as evenly as you can. Unless you're entering this into a contest, no one will notice if the pies are a little uneven. They'll be too busy eating.

I strongly advise that you line a couple of baking sheets with foil or parchment and place your pies on those. A spill isn't likely (unless you misunderstand the written-in-French instructions and use just one deep dish pie pan), but if it happens and this goes all over your oven, you'll cry. The baking sheet will catch any “oops”.

The pies go in the oven for about 30 minutes. Don't quote me on that – watch your pie. There is absolutely no doubt when this is cooked – it will look firm and cooked. The top will be an incredibly delicious looking golden brown. You shouldn't have to reduce heat while it's cooking.

Just don't take a nap while baking the pie – watch it.

The last time I made this French Canadian Sugar Pie recipe, we were heading to visit my family for New Year's Day dinner and I really wanted to impress everyone. This is definitely one of those Canadian desserts that impresses!

So I put the pies out in the back porch so they can cool to room temperature.

After all, the children don't often go out there during the winter – it's too cold, just a place to pass through on your way to the house.

So as we're getting ready, getting coats and boots on … and not once do I think that I just sent the little girls into the porch to get their boots.

Luckily I have an understanding family. No one minded the fingermarks in the pie – they were too busy eating it.

There you have it. Go impress people with your French Canadian desserts and create a new family favorite, but don't blame me for any weight gain.

Can Sugar Pie Be Frozen?

I will be honest – I've never tried. Never, not even once, have I had sugar pie last long enough to make it to the freezer. I've even made extra, thinking that one would maybe maybe last … nope.

However, all of the experts agree that cream pies and sugar pies can be frozen for up to three months. And I've successfully frozen lemon meringue pie, which I thought would be even more delicate.

Let the pie cool completely, then wrap it up airtight in plastic wrap, and freeze. When you want to eat, place the wrapped pie in the fridge and let it thaw completely.

CLICK THE BUTTON TO SAVE THIS YUMMY RECIPE TO YOUR BOARD!

French Canadian sugar pie – delicious, decadent, but also incredibly easy to make. You might already have the ingredients in your pantry.

Dusting the pie crusts, top and bottom, will keep them from totally disintegrating into the pie. It's completely optional, though.

All Those Grandma Recipes

Packed with nearly 1000 tried and true “from scratch” recipes, A Cabin Full of Food will show you how to stock your pantry – and how to use what you store. No cans, boxes, or bags.

A Cabin Full of Food: How to fill your pantry and use what you store" rel="nofollow noopener sponsored" target="_blank">

A Cabin Full of Food: How to fill your pantry and use what you store
$26.00
Buy on Amazon
Previous Post: « Self Care Gifts for Someone You Love (Like Yourself)
Next Post: 10 Ways to Eat Healthy on a Budget »